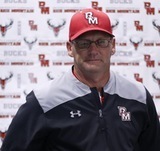 El Dorado Schools is excited to welcome Jeff Burson as the new head boys baseball coach of the El Dorado Wildcats. Coach Burson is coming home to South Arkansas after working as the Pitching Coach, Strength Coach, and Recruiting Coordinator at the University of Arkansas Rich Mountain over the past school year.

Phillip Lansdell, El Dorado Athletic Director, said, “The El Dorado Athletic Department is excited to have Jeff Burson join our team as the head baseball coach. Coach Burson is well respected in the baseball world for his knowledge of the game and his work ethic. I have known Jeff for a long time, and he is a very good person as well as a coach. He will continue to build on the success our program has had and will bring a high level of energy every day.”

Coach Burson is a graduate of Southern Arkansas University, where he played college baseball and eventually began his coaching career as a Graduate Assistant. He then went on to be the head coach of his alma mater, Smackover High School, from 2017-2020.

“I am excited to be a part of the Wildcat family and even more excited to have the opportunity to continue the development of the young men of the program,” Coach Burson said.

Coach Burson is married to Felisha and has two children, Lindsay (25) and Beau (22; currently playing baseball at Ouachita Baptist University).